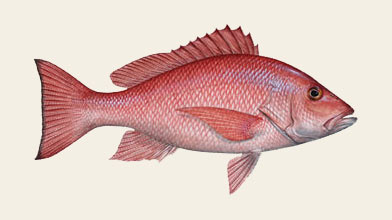 Red snapper (Lutjanus campechanus), found off Florida's Gulf and Atlantic coasts, is one of the best-known and desired deep-sea delicacies. Snappers are caught in waters 60 feet to 200 feet deep. Large electrical and manually powered reels are used with multiple-hook rigs. The red snapper industry was started in 1870 in Pensacola, Florida by an enterprising New Englander.

The red snapper has pink to red back and upper sides, with the lower sides and belly being lighter in color. Adult red snappers are easily distinguished from other red-colored snappers. They are deeper-bodied, not as streamlined, and have a bright red iris.

Snappers prefer irregular hard-bottom formations of rock and limestone covered with coral and sponges. They feed on a variety of bottom- dwelling crustaceans and small fishes. The growth of this species is slow; however, individuals can achieve 30 pounds in weight and 3 feet in length. They attain sexual maturity after age two, and spawning takes place between June and October.

The moist, white flesh of the red snapper has a delicate sweet flavor. It is sold fresh or frozen as dressed fish, fillets, or steaks. It can be served broiled, baked, steamed, poached, fried, or grilled.